Bill Laswell's Method of Defiance is playing here! In San Francsico! Friday the 18th at the Regency Ballroom. I am so excited about this show. You should come with me!

I'm going to stop by the box office on Sunday for tickets. Ping me if you want me to pick one up for you.

Labor Day is past, but I'm still on the natural high from the camping trip Gill and I took to Devil's Postpile over the weekend. The weather was just about perfect and the area is as gorgeous as you'd expect being in such close proximity to Yosemite.

We arrived about an hour before sunset on Thursday and found a campsite near the river, set up camp and ate a simple dinner under the stars and nearly full moon before bed. Friday we did the short hike down to the the postpile formation itself. I was duly impressed: it's a large mass of volcanic rock that separated into enormous hexagonal columns when it cooled. We continued onto Rainbow Falls (too many clouds for a rainbow when we got there) and down to Little Falls further down the river where we had a lunch on a rock out in the middle of the falls. I couldn't convice Gill to swim in the pools below the falls. I can't blame her, someone told us the water was 40 degrees. We headed back to camp through a section of the forest still badly scarred by the large 1992 Rainbow Falls Fire (change of scenery indeed!) and got back early enough to prepare our one elaborate dinner (well not that elaborate, but everything tastes better when camping).

Saturday was to be our hike to get away from the anticipated Labor Day crowds. We set out across the river and were planning to leave the John Muir Trail to go up to Lake Emily which is at about 10000' (camp was at 7500'). Though the trail we were to take was on the topo map I had, we started to lose it after a mile or so. We did a tiny bit of rock climbing (yay!) to scale a 20' face (I did say tiny) and had lunch up in the sun and decided the idea of getting lost and spending the night out there was unappealing so we decided to head back to the JMT and head north. We still wound up climbing to about 9650' and Gill (who has asthma) started to have some real trouble with the altitude. She was a trooper, though, and after some rest we pushed on and were rewarded with some staggering views of the lakes and and landscapes. My favorite, I think, was Lake Rosalie (whoever named all of these was clearly obsessed with the ladies), we're already talking about doing a backcountry trip and camping along it. The northern reach of our hike was the loop around Shadow Lake at which point we hiked alongside the waterfalls back east to the river which we followed back to our camp.

In the end I calculate we did about 18 miles that day and it really took a toll. Even though Gill was the one having trouble early on, I was far worse off at the end of the trip. I staggered into our camp with an increasingly bad headache. Gill made dinner and gave me lots of water and after a couple of hours I had recovered. We certainly bit off a little too much that day but neither of us had any regrets.

Sunday we took a bit easier with a leisurely breakfast on the river bank before packing up our camp and heading back home. We stopped along the way at some hot springs before heading over the pass again. That was just the ticket. It would have been wonderful to soak all day, but with the long drive ahead we left after an hour or so and got home around sunset.

At some point I found out that this was Gill's first "real" camping trip and she took right to it. This is great news as I hope to do a lot more in the future than I have been.

My own photos will eventually make it to the web...

Gill and I have been joking around about me taking one of her classes for a while. I don't know when it became a more serious idea but somehow it has gotten to the point that tomorrow I'll be starting Latin 101. I'm kind of nervous! I haven't been in school for quite a while.

Gill only teaches three of the days a week so it took me as a bit of a surprise when she reminded me that her TA teaches two days per week as well. Are you counting? That's five days a week. Five. Rutgers (all those years ago at least) was of the longer and fewer classes philosophy so I haven't been in a class that meets five days a week since high school.

Obviously my ongoing underemployed status gives me some flexibility with my daily schedule making a 10am class possible. I've already been told by more than that I'm being a big baby and just to suck it up. It's just 101! I can always drop! But I tell you (again) I'm really nervous! Languages have always been my academic Achilles heel (in no small part because of my atrocious study habits).

I've got to go study some declensions or something...

I spent this weekend in Santa Cruz at a frisbee hat tournament1 with Gill. This was the first time I've been to a multi-day tournament. My body isn't hurting nearly as much as I thought it would be (my worst complaint at the moment is sunburn on my ankles) and I had a lot of fun. I played well on Saturday but kind of crappy on Sunday. I've been beating myself up a bit about it because our team was pretty good and probably could have made it to the semi-finals had it not been for a couple of spectacular screw-ups by yours truly. I know really, though, that it is just a hat tourney and the main point is to have fun2 and meet new peeps from all over. These things were accomplished so I just need to get over myself.

Also fun was camping up in the SC mountains. I love sleeping outside. Having the cool air blow in and being able to nestle into a sleeping bag equals pure somnific bliss for me.

I'm really happy to be playing lots of disc again (two nights each week of summer league as well). Even when some of my body parts think I'm overusing them, I think my general health and psyche are in a much better state.

1 Hat tournament: You show up and get stuck on a team with a bunch of random other players that you play with for the whole tournament.

2 To give an idea of the spirit of the tournament, in this one everyone was required to wear ridiculous hats. If your hat came off at any point, it was considered a foul and whatever penalty that would normally imply was incurred.

I'm going back to NJ for a bit to visit this little bugger (aka Jillian Rose, my niece). See you when I get back! 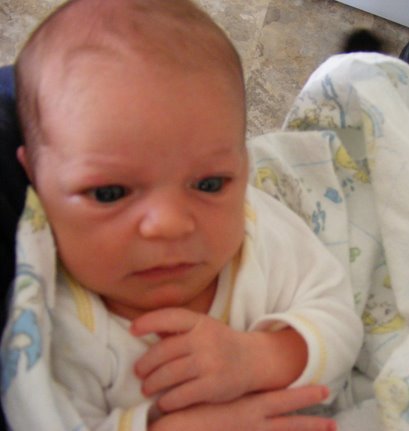 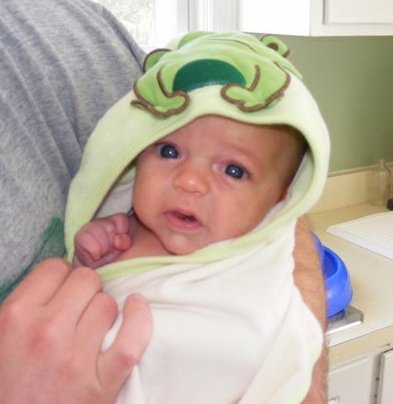 Just spent a bit over an hour dealing with a fraudulent credit card charge. About half of that time was on the phone with my CC bank. The steps for reporting such a charge involve answering the same questions repeatedly interspersed with some calming hold music for 5-10 minute intervals. The other half was updating all my automatic billings with the new CC number. It would be so nice if my CC bank could manage that for me.

Anyway, be on the look out for charges from www.ppcflash.com, apparently I'm not the first to get hit with this. It's a small charge, around $10.

Just as was about to make dinner tonight I was overcome with the urge to clean out my cupboards. I embraced this because I've gone several years without any such urge. I'm really not the tidiest person when it comes to, well, anything, but in this case, I refer to determining what should and should should not be shoved in the back of some shelf. That is, probably nothing should be shoved to the back of some shelf, but I shove everything back there.

Who knew such hijinks could ensue from such an industrious intention? Oh, the fun I had when a bag of tapioca flour came tumbling off the top shelf ("What's in there? I'll just give it a tug and catch it as it falls"). Fortunately I was wearing all black so I could clearly see where the flour landed on me and I could brush at it in annoyance. Now I'm wearing all grey. I also got to enjoy the lovely music of all those pieces of rotini crunching underfoot. Or were those the peppercorns. Or some other cupboard oddity I couldn't identify.

Gah. At least my cupboards are clean.

And now I'm on that Dreamwidth thing as "dang". Come find me if I haven't found you.

Would you pay $50 to chat with one of your favorite rockstars (current limited supply also requires Josh Freese being one of your favorite rockstars)? I don't think I would. I mean I'm sure I've spent that much on stupid shit before, but...I'm just really not a phone person, you know? And without the option to stick another quarter sawbuck in the slot to extend the call it seems like the opportunity of getting hung up just as things started to get interesting is too great. An all-you-can-eat dinner at Sizzler, on the other hand? Definitely worth the 500 clams.

I wonder if this sort of thing will go anywhere. It seems like a good idea at first, but I just don't see how it would scale. My friend thinks this is definitely the future though and if nothing else you have to admire Freese's creativity. And given how someone was willing to pony up* for the $20,000 package, well maybe he's on the right track.

*I don't read Wired much. Does it always read like The Onion? Anyway, click the link, the article's worth the read for laughs. "I'm sure we'll be friends for a long time".

On Wednesday night Gill and I had the great fortune to see Leonard Cohen at the Paramount. I couldn't post about it earlier because I just didn't have any words for it. I'm not sure that I do now either but the emotional intensity has worn off a bit by now so I can try.

It hadn't really sunk in until the show started that I was actually going to see him. For so long I've just assumed I would never get the change to see him perform so I was sitting there as the first song began not at all prepared for what was coming. Suffice to say, it was an absolutely stunning show. His ability to perform those well know LC classics with such verve and sincerity would, I suspect, well impress even someone unfamiliar with work. But having such a personal connection to his music, I was floored. I've never been moved to tears like that during a performance and I don't know I could be for anyone but Cohen.

Though the night wasn't perfect (there were one or two songs I wouldn't have swapped out of the list: I really couldn't believe he played Democracy, there are some parts of the LC songbook best left in the past), it was a night I've never experienced before. To the point, even, that I wonder if I would go see him again because I could never hope that another concert could, for me, live up to that night. Oh, alright, of course I would!
Collapse